"The topics offer as much variety as the musical styles. (...Renee) performs rap, tap, chanson and pop" | Frankfurter Neue Presse

"The time of clichés has come to an end (...) Intense and intimate!" | Hattersheimer Stadtanzeiger

Show soprano, entertainer and self-defined 'bastard of categories' Andreas Renee Swoboda enlarged his solo show portfolio and created his new lyrical performance "RENEE auf Erden" ("RENEE on earth", in German language only) with the famous author Friedhelm Kaendler, who writes poems as well as for the stage - in his very special style. The show re-defines the (also) male stage character RENEE as a performer between singer, poet and actor. The musical styles easily jump betwenn for example rumba, tango, musical or show tunes. Maybe the 'pursuit of happiness' is a central idea in Renee's lyrical stage show, featuring the humorous and sensitive lyrics and texts of German poet and director Friedhelm Kaendler, who created the show with Renee and his stage partner and piano player Andreas Brencic (Vienna), Renee reincarnates and arrives....on earth. 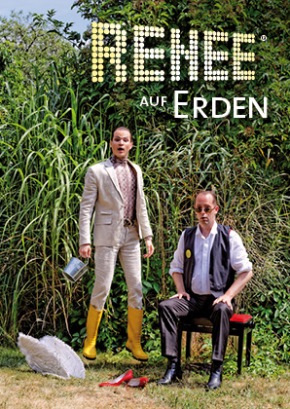 How the show was developed